When the Eastern Region decided to expand the number of teams making the playoffs a few years ago, the Beach District, with 11 teams, was forced to start their season a week earlier. The 2011 football season was scheduled to begin play on August 26. With Hurricane Irene approaching the area, all football games were postponed.

The district revised their schedule and the missed game would be played during the week. The Friday game would be moved earlier to Thursday, the makeup games would take place on the following Tuesday and next Friday’s game would be pushed to Saturday. In all, most teams would be playing 3 games in 10 days. A lighting storm on Thursday pushed that day’s game back to the original Friday. In order to get all the games competed in time, the revised schedule was kept as planned. So most of the teams will now play 3 games in 9 days. I’m sure there will be some sore football players in the Beach District this week.

The Kellam vs Kempsville game was played on Tuesday. Here are a few action shots from the game. 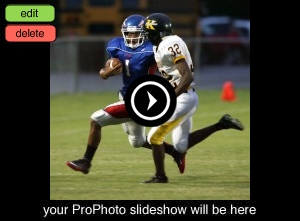